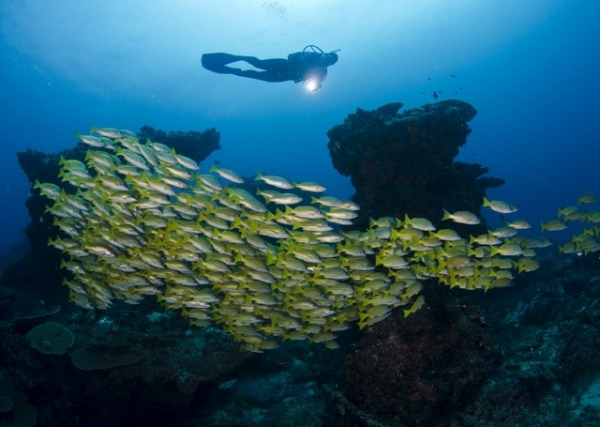 In February Triton had the privilege of hosting and diving with top (award winning) South African photographer Geoff Spiby,  his wife Lynne and Georgina Jones, an invertebrate expert and passionate Cape-Town based diver. really came to the party and the fantastic diving conditions that  couldn’t have been better with day after day of endless viz and zero current. The trip developed as a final component of the Reef Atlas Project led by the South African National Biodiversity Institute and much discussion was devoted to developing new initiatives that divers can contribute to.

Day One – we decided that we must show Geoff our best macro sites and dived Bikini and Stringer on two mile reef to see paper fish, pipe fish, sea moths, seven shrimp species, morays galore and even had dolphins cruising past us on Stringer .

Day Two – we were completely spoilt and took all our tanks for a north to south dive fest! We started at the  9 mile Coral Tree and the deep side of breaking waters where  Geoff captured beautiful reefscape images and unusual shots of a free smimming electric ray and a shimmering shoal of silver baardman on the sand next to the dropoff. We chilled on the boat and then of course had to dive 7 mile which was  amazing as usual. Geoff was able to capture the amazing colours on this reef where thistle corals abound and photos of clouds of shoaling fish will support work to communicate the value of this imorttant Marine Protected Area. We quickly jumped in at 8 mile,for 15 minutes and Geoff took a series of images that stitched together show the arch at Ramsey’s ledge. The   last dive of the day was at Antons Reef which was full of huge schools of snappers and slingers. Geoff also captured a great shot of a marbled leopard grouper and this will contribute to the inventory of individually marked fish (each one has unique spot patterns)  in the iSimangaliso World Heritage Site.

Day Three was back to macro with a long dive on two mile (Four bouy to arches), Hopscotch (to see the Frogfish) and Stringer on the Menu. Purple sponges contrasted with orange goldies, blue and yellow ribbon eels and bright yellow boxies were caught on camera. Sand-diving razor wrasse and ghost pipefish also provided interesting photo opportunities.

For the final day’s diving we wanted to show Geoff one of our newly discovered 50 meter sites called Angry Penguin, this site is full of delicate crinoids or feather stars of every colour, tiger anenomes, blood snappers and other unusual creatures. Georgie found a new red  ghost pipefish.  We really wanted some top class photos to show it off and boy we were not disappointed.

So feast your eyes on some of what has to offer you and start planning your next trip to come and dive with Triton Dive Lodge now.