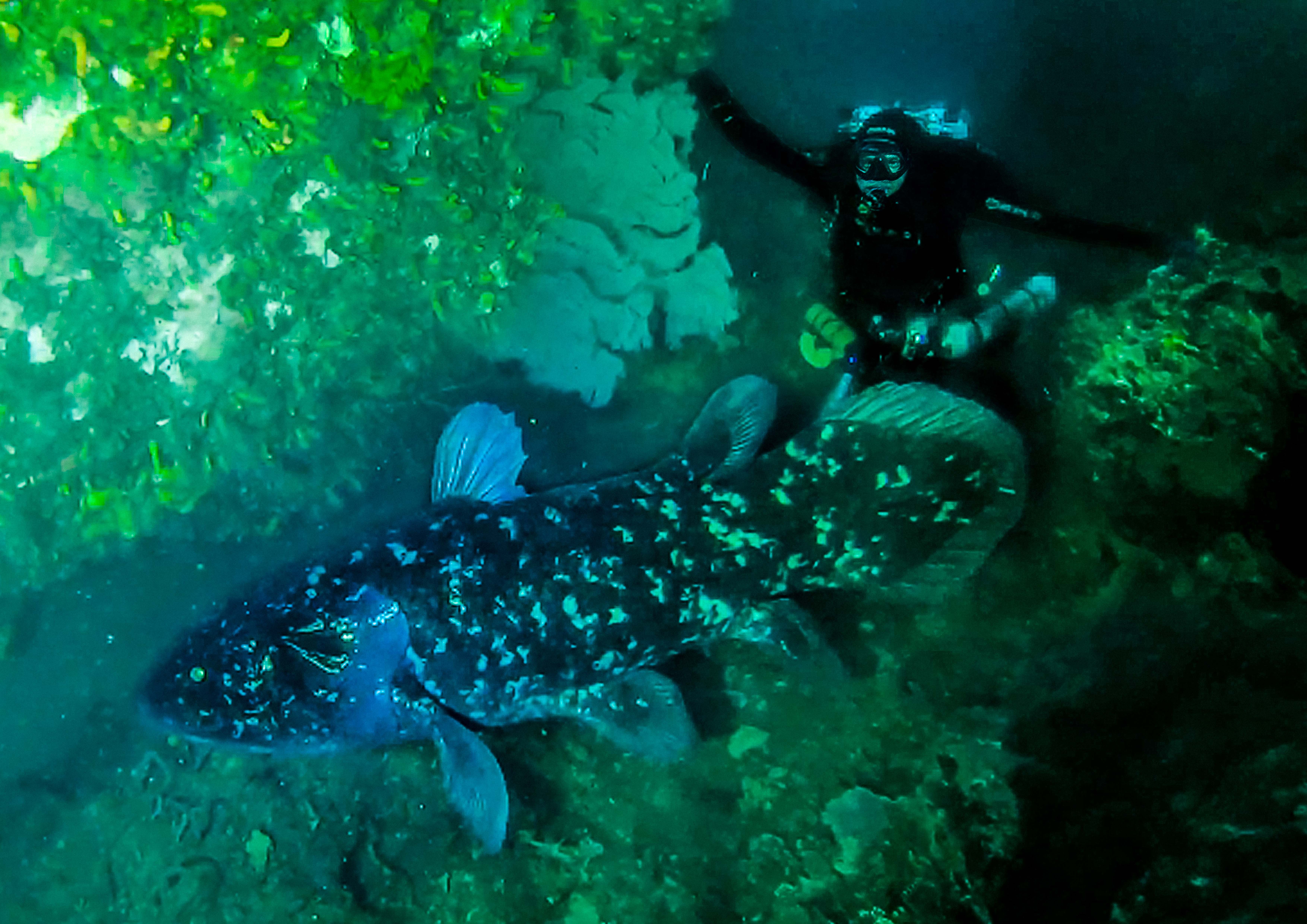 On Friday 22 November four technical divers, two from the Western Cape and two from KZN made an extraordinary discovery.  While diving at a depth of approximately 70m far offshore from their Pumula beach launch site they came across a coelacanth.  The divers were Bruce Henderson and Mossie Carstens from Somerset West and Mike and Alan Fraser from Pumula, KZN. They were supported by Ben Henderson and Marc Dukes, also from Somerset West, who remained on the boat during the dive.

Coelacanths were thought to have been extinct for over 60 million years until one was caught off East London in 1938.  This specimen was caught as part of a trawler’s by-catch and discovered by Marjorie Courtenay-Latimer, a curator at the East London museum.  It was later identified as a coelacanth by the famous South African ichthyologist, Prof JLB Smith who named the species Latimeria chulumnae, after Ms Latimeria and the river mouth off which it was caught.  The species has subsequently been found in the Comoros, Madagascar, Tanzania and Sodwana in South Africa.  Until this recent find in KZN, they had only every been dived with in their natural state in Sodwana.  They are listed as critically endangered.

After having spent several months diving in the Comoros in 1992, a place long considered to be the home of the Coelacanth, it has been a dream of Bruce’s to see this rare fish underwater. He and Mossie had been planning a trip to Triton Dive Lodge, Sodwana in KZN to dive in the Jesser Canyon in the iSimangaliso marine reserve, the only place on earth where coelacanths have been seen by divers.  This expedition was supposed to take place this November but had to be called off due to a delay in the issuing of the necessary permits by the relevant authorities. Bruce therefor called his long-standing friend Mike Fraser in KZN, explained the disappointing postponement and asked if he and Mossie could spend a long weekend with him doing some explorative diving.

Conditions in Pumula during their visit were perfect and on 22 November the four divers and their support crew launched from the beach and set off to an offshore site that Mike and his son Alan has been planning to dive for years. On the boat trip Alan assured the team that based on his fishing experience in this area, the habitat of this reef was suitable for coelacanths. He was certain that there were coelacanths there. The team joked about seeing one and reminded Bruce to take his GoPro video recorder.

During the descent the drivers drifted slightly off their intended mark. They leveled off at about 70m and started swimming toward the targeted reef. About 7 minutes into the dive Alan started screaming into his rebreather mouthpiece and beckoning madly. Bruce and Mossie, followed by Mike quickly made their way over to the deep crevice that Alan had entered and there they made this incredible discovery. The divers estimate that the fish was approximately 2m long and weighed over 100kg. They were able to spend about 8 minutes with the coelacanth, with Bruce videoing the entire experience. His original footage is available on You Tube on the following link https://www.youtube.com/watch?v=dGP-3MyBwtl .  The fish was totally unperturbed by the divers but after a total bottom time of 15 minutes the divers were compelled to begin their 45-minute ascent back to the surface.

The find has stimulated enormous local and international interest.