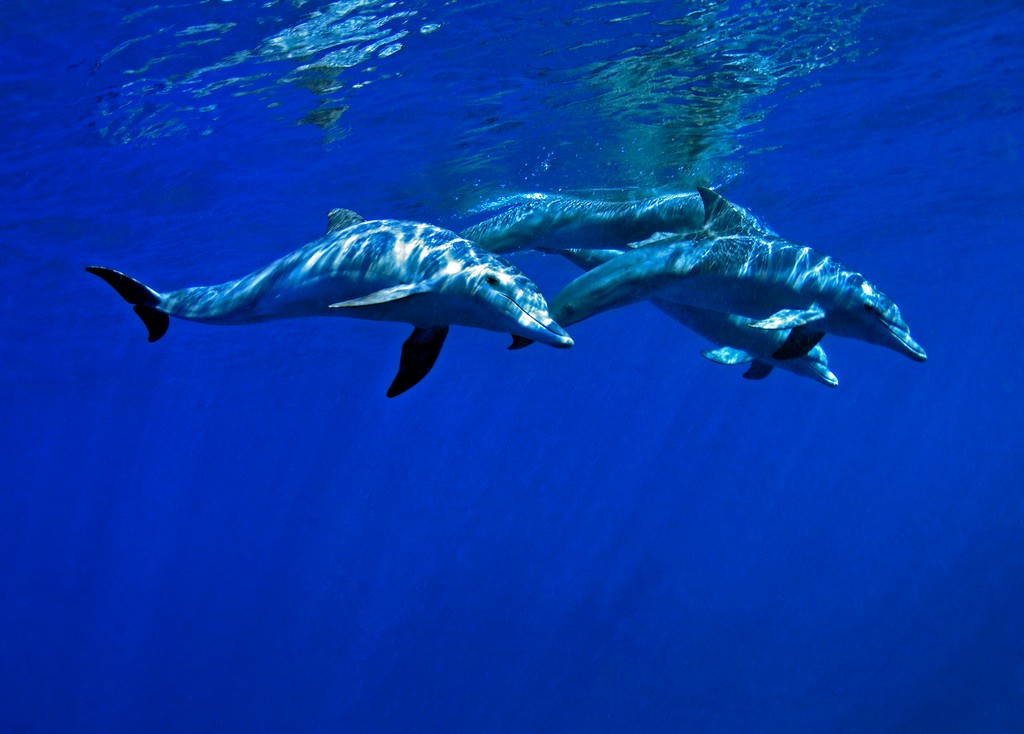 The five most intelligent marine animals are

Although not sighted in these waters you can see them in CapeTown!  Sea Otters have been observed playing basketball, stacking cups and are aces at smashing abalone shells off of rocks to open them.  These super smart creatures have even been seen going into vending machines to retreive snacks!

Not surprisingly Dolphins are the top of the smartest ocean creature list.  They have long been recognized for their complex behavior.  Their brains weigh in at 3.5 pounds (humans are only 2.9 pounds) and their brain to body ratio is greater than that of apes.  They can recognize their own reflection and increase problem solving skills as well as play with toys, solve puzzles and use tools - all of which are signs of increased intelligence.

Using their own language of clicks and whistles to communicate with other members of their pod, dolphins use this complex social system to co-ordinate hunting amongst other things.  They have been documented to use this language to work in teams to pull apart pvc piping with fish hidden inside in one particular case study.  Dolphins have been known to help stranded people in the ocean to get ashore, grieve their own dead and express different types of emotions.

We often see pods of bottlenose, spinners and even common dolphins of of the boat on our way to go diving and if the dolphins are happy to play then we will snorkel with them.

Sometimes sighted in Sodwana Bay between the months of June and October but very rarely.  Orcas or killer whales have the second biggest brain among all the ocean mammals.  They enjoy living among their families and friends, they have social groups close to elephants and often travel together.  Known to learn local dialects (speaking dolphin for example), teach each other specailized methods of hunting and passing on behaviors and more.

Not sighted in Sodwana but definitely in the Cape, Penguins are independent and intelligent animals but tend to hide just how smart they are.  They can recognize themselves in the mirror and are so highly capable that they can be trained and conditioned.  They form intricate communities and hierarchies in groups, they are self aware, loyal and communicate to each other.

Octopusses are known to be one of the smartest animals in the world.  They can change color and texture, camouflage themselves, squirt our poison, exert a force greater than their own body weight and have a remarkably large brain.  They have been studied by researchers and have been found to be able to navigate through mazes, solve problems quickly and remember these solutions for future tasks.  There is footage of them escaping from aquarium tanks and escaping back to the ocean, slipping through a tiny hole, opening jars, using shells to protect themselves from predators and mimicking other sea creatures to scare away potential predators!!

Come scuba diving with Triton and dive on Sodwana Bay's amazing reefs to see an octopus in his garden under the sae.