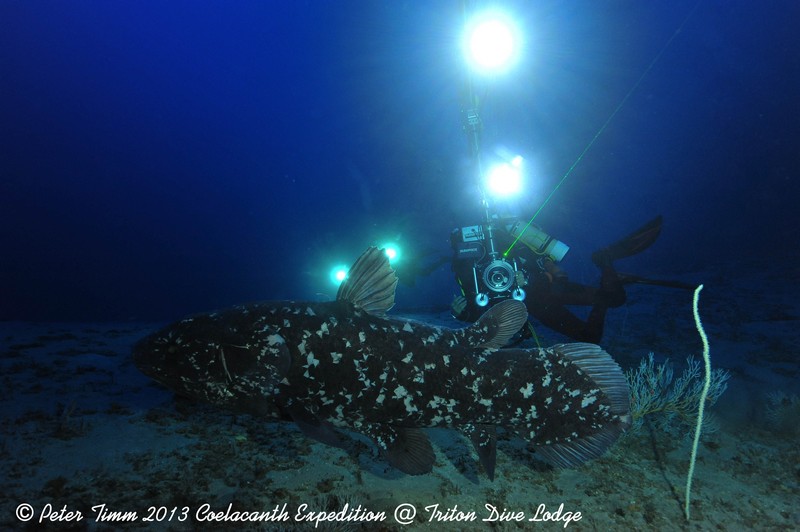 South African wildlife parks are renowned the world over. Yet, many local and international visitors to the country's expansive parks are unaware of the marine reserves along the nation's 2 850- kilometre coastline and the protection that one sanctuary offers to the world's oldest living fossil.

Paradises for marine life and divers, these marine sites offer protected status to about 87% of the different ecosystems off the mainland. Many inshore sites teem with the colourful life on reefs that attract adventurous scuba divers from around the world.

Undoubtedly the most famous but least seen inhabitant of Sodwana Bay, the coelacanth, was initially thought to have died with the dinosaurs about 65 million years ago. Until 1938, the fish was only found in fossil form. Then, however, a coelacanth was trapped in the net of the trawler 'Nerine' off the Eastern Cape Province in South Africa.

The fish was recovered by the curator of the East London Museum Marjorie Courtenay-Latimer and then confirmed and documented by Professor J.L.B. Smith of Rhodes University who named it Latimeria chalumnae in honour of its discoverer.

"I picked away the layers of slime to reveal the most beautiful fish I had ever seen. It was five-feet long, a pale, mauvy blue with faint flecks of whitish spots; it had an iridescent silver-blue-green sheen all over. It was covered in hard scales, and it had four limb-like fins and a strange little puppy dog tail. It was more like a big china ornament- but I didn't know what it was."

It was these unique fins that extend away from the fish's body and move alternately, making the fish's movements mimic the walking motion of some four-legged, land-based animals gave the coelacanth its nickname of 'Old Four Legs'. At one stage, it was also believed that the appendages could make the fish an evolutionary 'missing link' between sea and land.

Other features of the coelacanth include jaws that, unlike any other living animal, have a hinge that allows the jaw to open extremely wide so it can consume large prey. Instead of a spine, the fish has a hollow, pressurised tube. It also has an electro-sensory system which is located in the nose and assists with navigating obstacles and the identification of prey. At odds with its size, the coelacanth's brain occupies less than two percent of its cranial cavity.

Finally, setting it aside from other species the coelacanth gives birth to live pups after a three-year gestation period.

Despite extensive searches for a second fish in South African waters, it appeared as if the East London example would remain a one-off find.

Then, 62 years later in 2000, a team of three scuba divers from Triton Diving on a technical training dive off Sodwana Bay discovered coelacanths at a depth of 103 metres. Two commonly held beliefs about coelacanths perished with the sighting.

The first was that this massive survivor of the stone-age, which can grow to a length of about two metres and weigh about 90kgs, could not be found at 'diveable depths' was shattered.

The second was that the fish were believed to be active at night and favour deep-water caves at depths greater than 487 metres. Viewing, unless you had access to deep-diving submersibles, was thought to be impossible.

Unfortunately, none of the team led by veteran diver Peter Timm*, owner of Triton Diving, had cameras on hand to record the exceptional sighting. Described as the equivalent of "seeing a UFO without taking a photograph" by team member Pieter Venter, the historic sighting could have been passed off as another anomaly of the vast Indian Ocean if it had not been for the determination of the divers to prove otherwise. They returned to the Sodwana depths about a month later. More coelacanths were located and photographed at depths of around 100 metres.

Since the initial discovery, the coelacanths of Sodwana have been the subjects of several research initiatives, including tissue sampling by coelacanth expert Hans Fricke who used a dart probe in 2003 to gather biological information.

Peter Timm may have discovered that coelacanths could be located at depths accessible to skilled 'technical divers', but the fish remain elusive to most sport divers who seldom stray below 40 metres. Finding a coelacanth requires determination, and although access to specialised equipment makes these dives possible, it is still a hazardous occupation which requires that 'bottom time' is carefully monitored.

Diving the sites was outlawed in 2016 so that the canyons off Sodwana Bay could remain a sanctuary for the population of coelacanths. Research and filming expeditions are still undertaken but only after extensive negotiations with authorities. One of the most recent exceptions to the rule took place in May 2019, when a team with a remote-operated vehicle, the Angra Pequena, spotted a fish at a depth of 125 metres. It was identified as one of the 33 specimens making up the population of coelacanths in Sodwana.

The last documented sighting of the particular fish, named Eric by researchers, was in 2012. Nobody knows when he will ever be seen again. In the meantime, he and the other fish that inhabit the deep canyons on the Sodwana continental shelf can rest secure knowing that they will be able to live their lives of up to 60 years free of undue interruption.