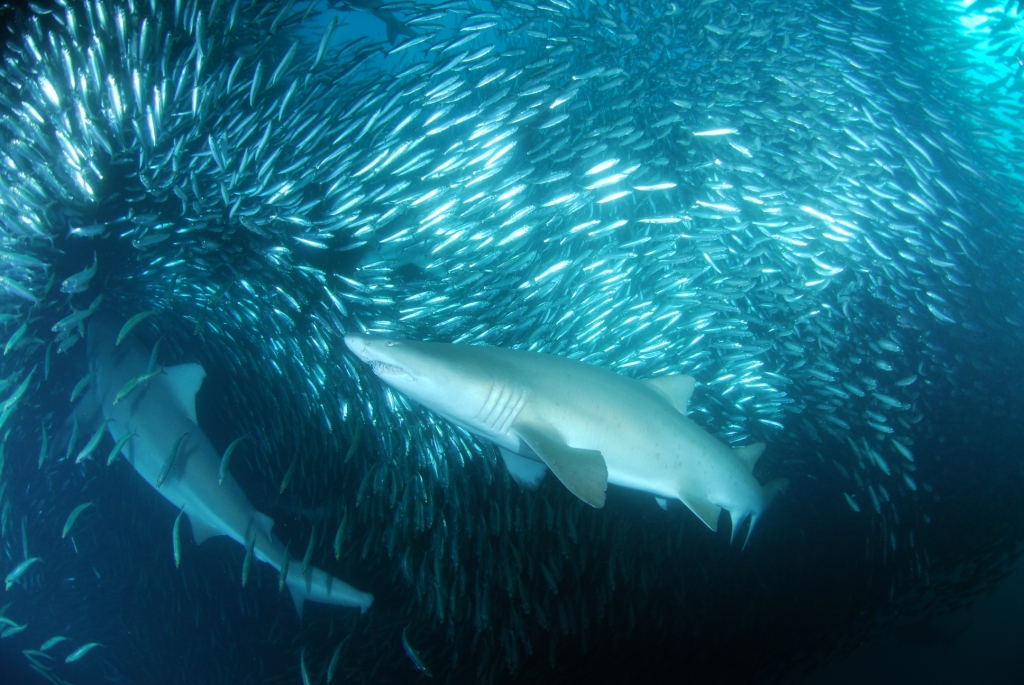 As winter settles into South Africa and scuba diving in Sodwana Bay gets a little chilly a magical migration starts to happen and word starts to spread "the sardines are here!"

Sardine run shoals can be 15km long, 4km wide and approximately 40m deep.  Sardines also known as pilchards and their close relatives , the anchovies and herrings, sardines (Sardinops sagax) live out their lives in huge shoals in the surface layers of the ocean.  Although these fish are small, collectively they comprise of nearly a quarter of the world's fish catch by weight.  They are cold water fish and normally associated with areas of cold ocean upwelling where deeper and cooler nutrient rich water surges to the surface when they strike coastal shallow waters.  They are found on the West Coast of California, South America, Japan, Australia and of course South Africa.

Each winter a small proportion of sardines that are normally found in the cooler Cape waters, move Eastward up the Wild Coast taking advantage of the cool water on the continental shelf of the east coast that occurs seasonally as a narrow band between the coast and the warm, southward flowing Algulhas Current.  No one knows what advantage the sardines gain by entering KwaZulu-Natal waters  as they are less food rich than the Cape waters.  Any favourable cooler waters are only temporary and to make things worst for the sardines they are accompanied by many predators and as the fish become more concentrated near the surface what can happen is the stuff that you would liken to a National Geographic production and set in the most breathtaking backdrop of cliffs and waterfalls of the the transkei coastline, a natural phenomonen unlike any other marine event on Earth.

The shoals are quickly located and whipped into a frenzy by many marauding predators.  Pursued relentlessly by thousands upon thousands of dolphins, sharks, seals, whales and gannets it is these creatures’ feeding frenzy that spawns the greatest faunal event on earth. As many as 23 000 bottlenose and common dolphins expertly herd the sardines towards shallow waters where the little fish form massive, heaving bait balls measuring up to 20 m in diameter. Super-pods of dolphins, whales and sharks sweep through the balls, gorging on massive mouthfuls of fish while voracious seabirds plummet from the skies above like fighter planes, scooping out their victims with ease. Almost as soon as it’s begun, it’s all over and the sea becomes calm and seemingly lifeless once again.

Amongst the predators are sharks such as the copper, dusky, blacktip and spinner, gamefish such as shad, garrick and geelbek, and marine mammals like Brydes, Orca, Southern Wright and Humpback whales, cape seals and common, bottlenose and spinner dolphins.  Forming the air attack are - Cape Gannets, cormorants, terns and gulls.

Join me on this adventure of a life time for the Sardine Run 2021.  Triton Dive Lodge and Two Bar Scuba have joined forces to host you in Port St Johns.  We have secured private beach front houses with Ocean Views and awesome catering options plus the option of transfers from Durban Ushaka Airport.  Dates start mid June to end July and we are offering 6 nights and 5 ocean day packages as well as shorter 4 night and 3 ocean days packages.  We are offering a great group incentives and commission structure for guides who want to bring their own groups.  Follow this link to our prices and information page.