Do some brittle stars care for their young? By Jennifer Olbers

Do some brittle stars care for their young? 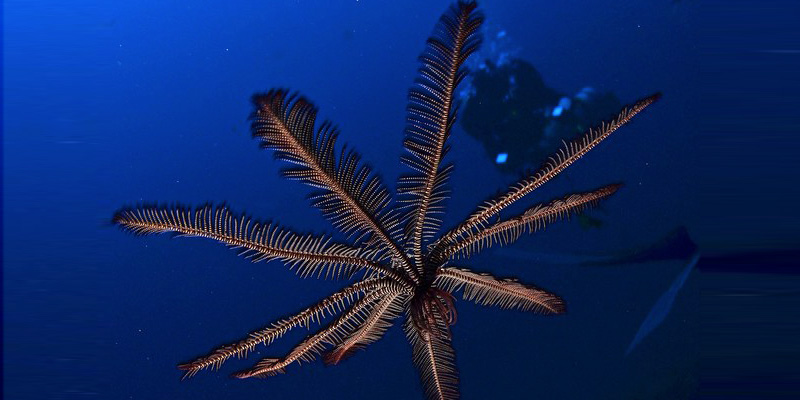 Between 1999 & 2001, a number of expeditions were undertaken to the KZN coast by a delegation of Belgian and South African echinoderm and seaweed experts in a collaborative biodiversity study. One of the many aims of the trip was to make the first biodiversity assessment of the echinoderms in an area which is historically known to be under-sampled by biologists.

The expedition reported 51 new distribution records bringing the total known echinoderm species occurring on the KZN coast to 181. However, as with many of these marine expeditions, many interesting specimens are collected and create many additional questions that are often left unanswered. 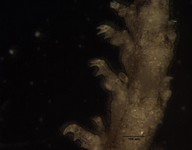 The echinoderm specimens collected during the Belgian/South Africa expeditions were lodged in the Museum for Central Africa in Brussels and a trip, sponsored by the Global Taxonomic Initiative in Belgium, was undertaken to answer these questions and a number of others pertaining to the brittle stars that had being collected.

The small brittle stars, affectionately known as ‘epizoica’ (Picture 3), were also found on specimens of Blotch-star brittle stars placed in the Paris Natural History Museum which were collected from Madagascar. So with lots of specimens of this small brittle star in hand, all was in order to gain new insight, not to mention that I was in one of the best equipped museums in Europe and I had the brains of a small gathering of echinoderm experts (Prof Frank Rowe, Dr Yves Samyn, Dr Didier van den Spiegel) at my disposal.

To identify brittle stars, taxonomists use a variety of morphological features such as the arms, jaws, disc shape, disc armament and arm spines. Each species have these characteristics in a combination of unique numbers, arrangement, shape and/or pattern. However, like many fish, baby brittle stars look completely different to the adults (Picture 4). The Blotch-star brittle star adults are light green with a variety of whites, yellows and browns with small fine granules covering the disc. Epizoica, however, is brown-grey in colour with the disc being marked with five radial pairs of bowed brown lines with the disc covered in scales and no granules. The arms of the adult blotch-star are banded while epizoica’s arms are uniformly brown. In addition, epizoica had arm spines that had tiny hooks which are thought to assist the animal in holding and clinging (Picture 5).

The Blotch-star brittle stars are part of the family Ophiocomidae and taxonomists have used the dental plates, an internal structure that can only been seen under a microscope, to identify the different species within this family. The dental plates, the structure on which the teeth lie, are unique for each species and using a Scanning Electron Microscope, the difference between Ophiocoma species could be clearly seen. The Scanning Electron Microscope images (Picture 6) show the dental plates from epizoica (left) and an adult Blotch-star brittle star (right). The structure of the dental plates contains a network of holes and the literature tells us that this network of holes in juveniles is coarse in comparison to the adults which have a fine structure. In addition, the two dental plates were remarkably similar. This led us to believe that epizoica was indeed a baby brittle star. However, this alone could not be used and after much deliberation, morphological comparisons and analysis between the unidentified epizoica, the adult blotch-star and other species of the same family, it was concluded that epizoica was in fact a baby blotch-star.

The blotch-star brittle star occurs in the Indo-West Pacific region but is not found in the Red Sea, the Persian Gulf or the north-western parts of the Indian Ocean. Prior to the study by the Belgians, the only record of this species from southern Africa was Mozambique but is now known to occur as far south as Aliwal Shoal. They are associated with coral heads on sand between depths of 0-54 m.